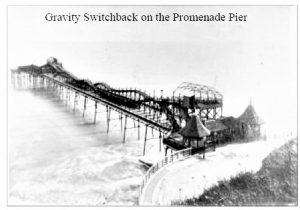 Did you know that Ramsgate once had a traditional pier? Although there is currently a concrete part of the Harbour called the East Pier, there was a time where Ramsgate had a Pier in its own right, a traditional wood and iron structure like those that can be seen at many seaside resorts all over the UK.

As part of our promotion of the new Pier to Pier (Ramsgate to Deal) Cycle Ride, we thought you’d like to know about the old ‘Promenade Pier’ that once graced our shores!  It was a short and not so sweet life as you are about to find out!

So what’s the story and why isn’t it there any longer? 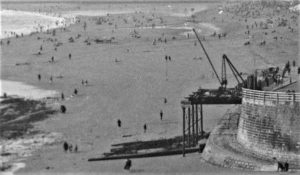 1879 saw construction begin on a 550 foot wooden pier which opened in 1881. Promising so much, the Pier cost £15,000 to build, and quickly became a success after opening.

So much so, that features such as a switchback railway, joy-wheel, angling and a 250 seat pavilion were added fairly soon after.

The company behind the pier, The Ramsgate Promenade Pier Company Ltd. Enjoyed just two years of success before falling on hard times, and financial woes led to it being ordered to be wound up in 1883. The Pier was auctioned off, and bought by the contractors for just £250 in 1884. A bargain! 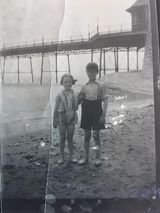 The Pier continued operating until storm damage in 1897 meant that the switchback railway had to be removed.  But all was not lost, and the Pier kept limping on during Edwardian times with more attractions being added, but it was finally closed to the public in 1914 when it was deemed too unsafe to use.

But that wasn’t the end to the Pier’s woes. 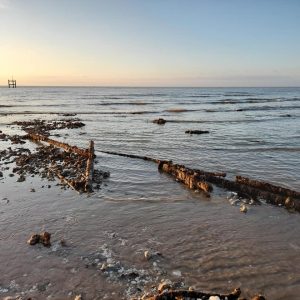 During the First World War, it suffered fire and collision damage which was bad enough, but that was subsequently followed by a mine which exploded under the structure in 1918. The resulting damage put an end to any hopes that the Pier may have been saved.

The Ministry of Transport took over the Pier in 1929, only to finally demolish the structure the following year.   All that’s left of the traditional iron and wooden structure are a few remnants only visible at a very low tide.  Our poor old pier didn’t even reach its half-century milestone!

So what we now refer to as ‘East Pier’ is a structure made of concrete that’s part of the Royal Harbour.  It actually pre-dates the wooden pier, and isn’t even in the same place but of course it is now the starting point for our new Ramsgate to Deal, Pier to Pier Cycle Ride!

As the East Pier is built of concrete, it’s made of sturdier stuff, and is enjoyed by thousands of visitors to Ramsgate each year whether for a stroll to experience the sea views, a spot of fishing or to stop and rest for some food and drink in the Royal Harbour Brasserie, it’s our Pier and we love it!

We use cookies on our website to give you the most relevant experience by remembering your preferences and repeat visits. By clicking “Accept”, you consent to the use of ALL the cookies.
Cookie settingsACCEPT
Manage consent

This website uses cookies to improve your experience while you navigate through the website. Out of these, the cookies that are categorized as necessary are stored on your browser as they are essential for the working of basic functionalities of the website. We also use third-party cookies that help us analyze and understand how you use this website. These cookies will be stored in your browser only with your consent. You also have the option to opt-out of these cookies. But opting out of some of these cookies may affect your browsing experience.
Necessary Always Enabled

Performance cookies are used to understand and analyze the key performance indexes of the website which helps in delivering a better user experience for the visitors.

Analytical cookies are used to understand how visitors interact with the website. These cookies help provide information on metrics the number of visitors, bounce rate, traffic source, etc.

Advertisement cookies are used to provide visitors with relevant ads and marketing campaigns. These cookies track visitors across websites and collect information to provide customized ads.

Other uncategorized cookies are those that are being analyzed and have not been classified into a category as yet.